Ryan is also the creator of the popular AutoPad app, built with AudioKit as well. Ryan sat down with us for an interview where he shares lots of great advice… 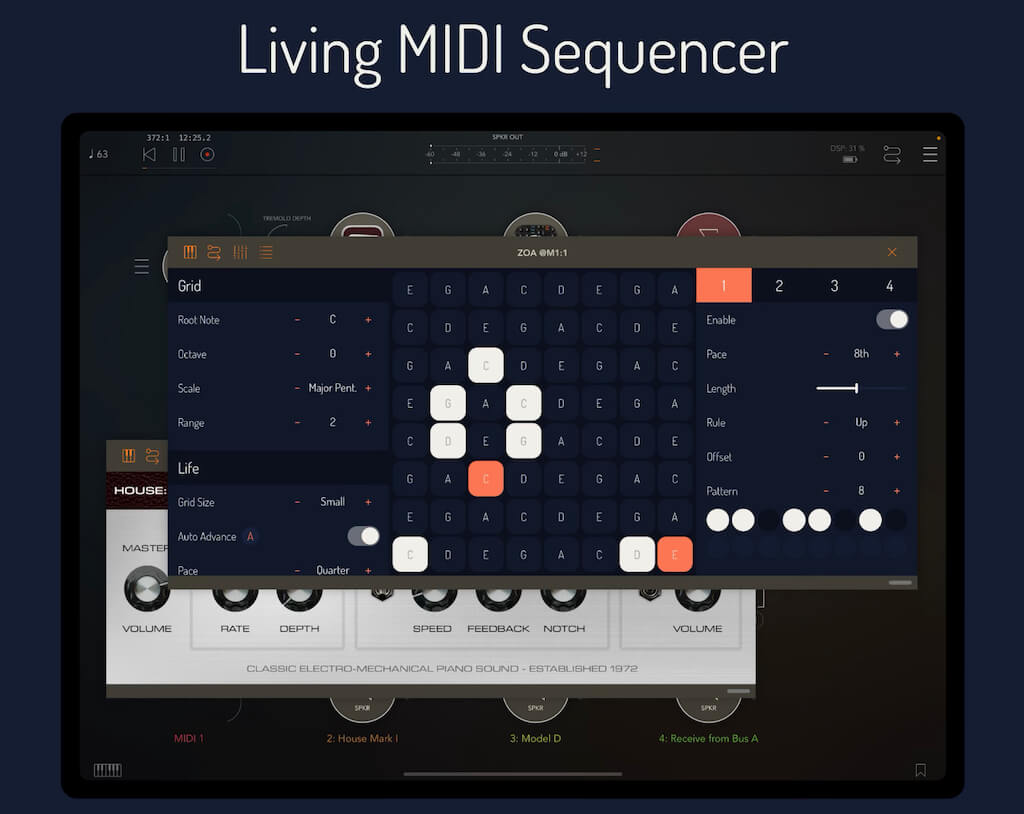 Ever since I learned about the Game of Life I thought it would be fun to hear what it sounded like. I think a lot of people think this because it’s easy to find various sequencers and synths based on it around the internet. But when I looked around, none of them really inspired me or suited my workflow. So I thought I had something to offer by presenting my own idea of what the Game of Life could sound like.

With each app I make I try to push my skills and learn new things. With ZOA I wanted to take what I had learned about MIDI in my other projects and push it a little farther. One example is that I worked on building my own MIDI clock sync mechanism for the standalone version. It was fun to spend some time researching how that works and then think about how to get it safely integrated into my code. It was one of the few times where I was able to get things working as I expected more or less on the first try. Very rare for me!

Start simple but also start with something that feels interesting to you. Don’t just make a tip calculating app. Put it out for free for at least a bit. Work hard on presenting your creative vision in your apps. You get to make a statement about “how things should be” when you make an app and that is what will help you stand out.

Be realistic about the time it takes. I am very lucky to work on my own music apps full time now, but before that, I was putting a huge amount of my free time into learning and working on apps. Also, don’t expect to strike gold quickly. Don’t let the scary technical stuff keep you from getting started. If you have an idea, do what it takes to get it built. AudioKit is a great place to start, of course. Make sure you have a willingness to keep learning and keep improving your code as you go. I think the challenge with making apps isn’t so much making them but making them good enough to share with others. I had a rudimentary version of the audio unit running in like two or three days. It was was fine for me, but it wasn’t really good enough to be a product. It’s the follow-through to work out the bugs, handle the edge cases, and polish things up that I think requires real effort.

I’ve gotten a lot of great feedback and ideas from people already, so there will be ZOA updates for sure, but mainly I’m excited to work on new ideas! I have at least one other idea for a MIDI app simmering right now that interests me and that I think people will like. Ryan Robinson has released an AUv3 MIDI sequencer called OODA – Portable MIDI Sequencer. On its release, it shot to the #1 spot on the Music…